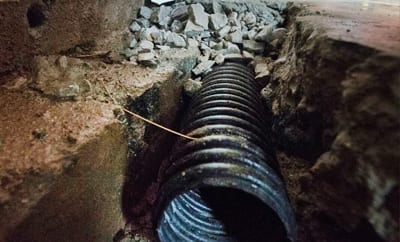 Foundation water seepage has been a problem since homes were first built with underground basements.  Unfortunately, there are several reasons that could cause this problem.

For more than forty years, the most effective method for eliminating seepage from basements has been the installation of an interior French drain system by a qualified contractor such as D-BUG INC.

An interior French drain is a proficient draining method used to eliminate basement water problems. This method drains water from the hollow cores of the block to a pipe that runs under the floor. D-Bug’s process is superior due to grading and sloping the French drains anywhere from 6 to 18 inches toward the sump pump. D-Bug Waterproofing French drains any type of foundation: block, terra-cotta block, poured cement, or stone.  The sump pump then pumps the water up and out of the basement away from the house or structure.  This procedure lowers the water table, thus preventing any water from coming into the basement.  D-Bug Waterproofing warrants the areas we French drain, warranting  that you won’t get water on the floor. This is a lifetime warranty which is transferable if you sell the house.  Furthermore, D-Bug Waterproofing has a 100% success rate on interior French drains.

Get a FREE Quote!